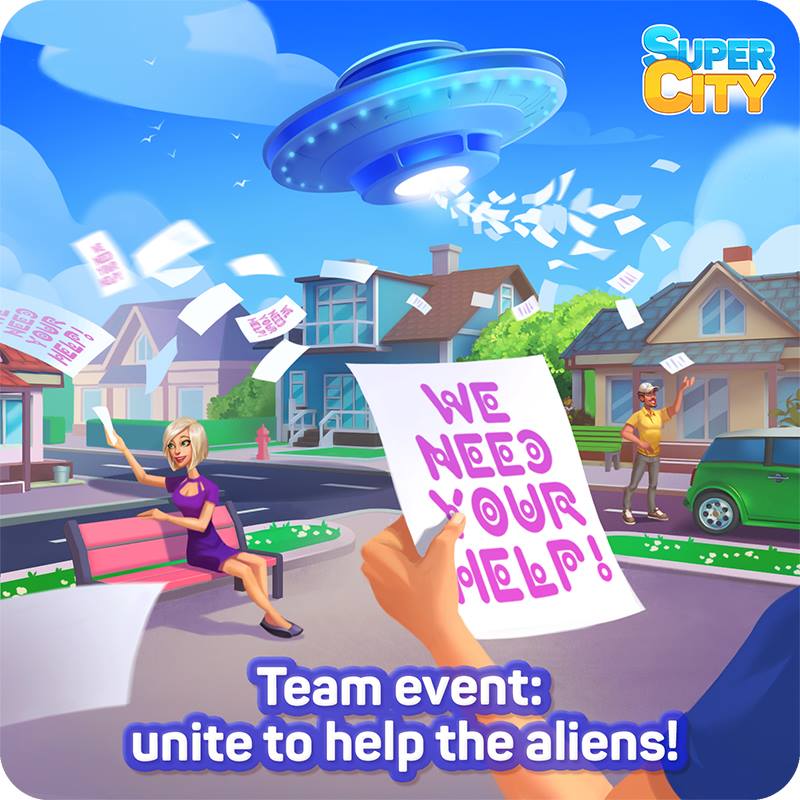 Aliens are back in SuperCity! Team up to:

1) win the main prize – the Space Port, and buy brand new stuffs in the Alien Curiosity Shack;
2) help these alien cuties;
3) prove all the community your team is the best by taking part in the new TEAM rating!

What is this team event about?
During this team event players cooperate in teams and complete tasks to reach the common goal. Each team’s goal is collecting Alien Energy and receiving gifts for it.

As in the St. Valentine’s team event, there is a special shop called Alien Curiosity Shack, where you can get buildings and decorations (including brand new ones!) with Alien Crystals.

There are two types of Crystals: Alien Pyramid and Alien Cube.
You can start to earn Pyramids NOW by playing Bingo (check all the details below).

As soon as Stage 2 starts we’ll tell you more about the rewards, stay tuned!

This event is available to start for level 15+ players.
The event is divided into 2 stages: team building and tasks completing.

Note: You have to be in regular screen mode and NOT in full screen mode in order to type in the team event chat.

You can either create your own team (you become a captain) or join another team by sending a request first:

1. If you create your own team, you can send invitations to your friends and accept or decline other players’ requests:

– Choose wisely who you accept: once a player joins, you can’t remove them from the team (but a player can leave your team on their own: read below about it);
– You can log out from your own team, but you need to appoint a new captain from your team members:

– Once your team is full (5/5 members), all the pending requests will be denied.

2. If you send a request to another team, you should wait for acceptance or rejection from a team’s Captain.

– You can send up to 5 requests at a time (it means you can have up to 5 unanswered requests at a time).
– You can call off your request if a Captain hasn’t considered it yet.
– If you sent several requests, you would join the team which accepted you first.

Important: Teams of 1 to 5 members are allowed, but the more teammates, the easier collecting Alien Energy is (the required amount of Energy is the same for all the teams).

Tasks are individual for each team member and their difficulty depends on a player’s level.

🆕 NEW: we have listened to your requests and this time we’ve changed the individual rating to the TEAM RATING! One more reason to build a team 🙂

Important: If you don’t join a team or create your own before Stage 2 starts, you can’t participate in the Return of the Aliens team event.

All the team members work for a common goal completing tasks. You receive one Alien Energy for helping one character.

Tasks are individual for each team member and their difficulty depends on a player’s level.

After receiving the Space Port, your team can continue completing the tasks and get extra rewards. There’s a set of 3 extra rewards which go round and round unlimited times:

and so on, starting with Extra reward 1 again.

🆕 NEW: Team Rating
According to your requests we’ve changed the individual rating to the TEAM RATING.

The “Rating” tab shows the progress of all the teams on Facebook. After the event ends, teams at the first 100 places will get extra rewards. Each team member will get:

There are two types of them: Alien Pyramids (green) and Alien Cubes (orange). 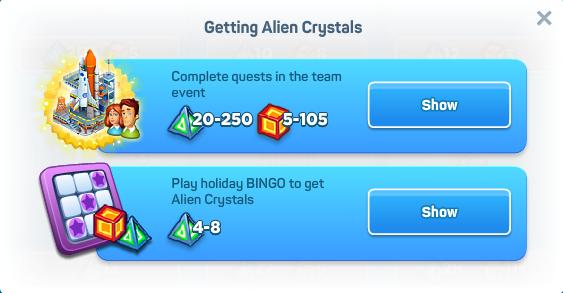 You can earn Pyramids by playing Bingo now (guaranteed drop) and later receive both Pyramids and Cubes as on-the-way rewards and extra rewards (check the “?” icon in the Shack window).

The Alien Curiosity Shack is available till May, 15 9:00 UTC (5:00 EST). There are 3 days more after the end of the team event to let you spend your Crystals and/or earn some more in Bingo.

5 thoughts on “SuperCity Team Event: Return of the Aliens!”