Mayor, when you enter the game today and Will tells funny thing which appeared in the game! Look carefully for its history because this is a historical moment! 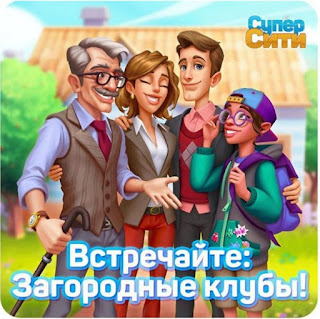 Country club is a new SuperCity mechanics:
– gather the team together neighbors and chat with them;
– help your friends in a club with quest items, and they will help you;
– monitor the activity of club members in the Help Rankings;
– follow us: this is only the beginning!

(Don’t forget to read the Rules for requests carefully for information and assistance to members in the “Member request” tab!)

To start the Team Club, you will need to click on the Crown icon.

You can compose a team of up to 20 people.

The Team Club is accessible from level 30.

There will not be a team event but a team club.
This is a new feature in the game.
You play as a team and win prizes together.
You can create a team, add, or delete a member of your team, join another existing team and chat directly on the game or you can compose a team of up to 20 people.

It is a little complicated to explain ….. however you have to form a club and choose the language, Italian, Spanish, Russian, German etc… you can decide what type of club to do, if the club is open to all players or closed only for a certain type of level, for example, I could only say for levels 200 and beyond .. or make a club that only participates in competitions …. you can choose how many people can enter. 10 … 20 whatever you want.

Let’s clarify on the upcoming mission …..
The Club Captain (the one who creates his team) pays 30 superbucks – and only her or him and once …..

See the red circle ………
If you press on it your club becomes CLOSED – PRIVATE so it will not show up in the search, nobody will see your city except your members.

An important thing :
If you make a club “closed” (invisible) as regards to the various clubs on the list, to add friends the Captain (i.e. the one who created the club and who spent the 30 superbucks) can invite friends with the ID number you have under the game. This is only if you make an invisible club!!

If you make it “open”, however, everyone will be able to see it and if there are no restrictions per level, they can send their
requests to the club!

When you choose the name you have to think about it because you can’t change it later.

The Logo you can only put on once.

You can invite friends to your club, you need to know the friend ID of your game neighbor (it’s under the game) and you have to enter it in the window and click on “send invitation”.

Once you have made the club ….. you can send materials or receive them, but to send them you must have them in the inventory.

Let’s clarify the upcoming mission …..
The Club Captain (the one who creates his team) and pays 30 superbucks – and only her or him and once …..

CAUTION !!!
Do not argue about this thing because after if the Captain is missing a piece and you use superbucks, it transfers behind the favor.

They are 2 types of clubs:

Logo and name the club.

Requests in the club can be made by anyone.

You must be at level 30 to be able to join the club.

After the mission starts the requests leave.

For example :
Fruit or Bay dishes;
Tent steps and pieces that are made in the Sands;
Cargo port;
Tailoring and Furniture Factory.

If the Captain does not have all the pieces he asks members of his team if someone does not have them in order to arrive at the required number of pieces ….