Mayors, how about taking part in a new challenging event – the Club Regatta! ⛵It will be a true sporting event where planning and coordination are truly essential 🤔and the contribution of each club 💪 member is downright crucial. 😎

Are you ready for the sailing ⛵⛵ race? Let’s go then!

Welcome to the first Club Regatta!
To participate in the Regatta, you need to be a member of a country club (available for players of level 30+).

Prizes are given to players after the end of the Regatta – if you leave the club during the Regatta, you will not be able to receive the prizes. In this case, your points will remain in the club.

The active part of the Regatta lasts 6 days.

To enter the Regatta, you can use the icon on the right:

or go through the island which is specially decorated for the event.

In the Regatta, you need to complete quests.
The same set of 9 quests is available to all players.
During the entire Regatta, each player can take 7 free and 2 paid quests (10 superbucks each).

For each quest, you have a completion time in which you need to meet in order to get Regatta points. Here you see how many points you will get and how long you have to complete the quests.

In order to pick up a quest for completion, you need to click the “Accept quest” button.

After that, the task will disappear from the general list and will be available to you in the “Active quests” field.

Also in the Active Quests, you can see which of the quests your teammates took.
You will also be able to decline an already accepted quest – to do this, use the “Decline” button.

Please note that in this case you will not receive Regatta points, and the quest will still be considered as one of the 7 available for the entire Regatta!

After you have taken the quest for yourself, it disappears from the order board and a timer for waiting for a new order appears in its place – 30 minutes. Any member of the club can speed up the waiting time for superbucks (the cost depends on the waiting time).

Players also have access to information on the number of tasks taken and points scored by their teammates – the “Statistics” button.

The President and Vice-presidents of the club have access to editing quests – they can delete quests from the board (after that there will also be a waiting time for new quests of 30 minutes). 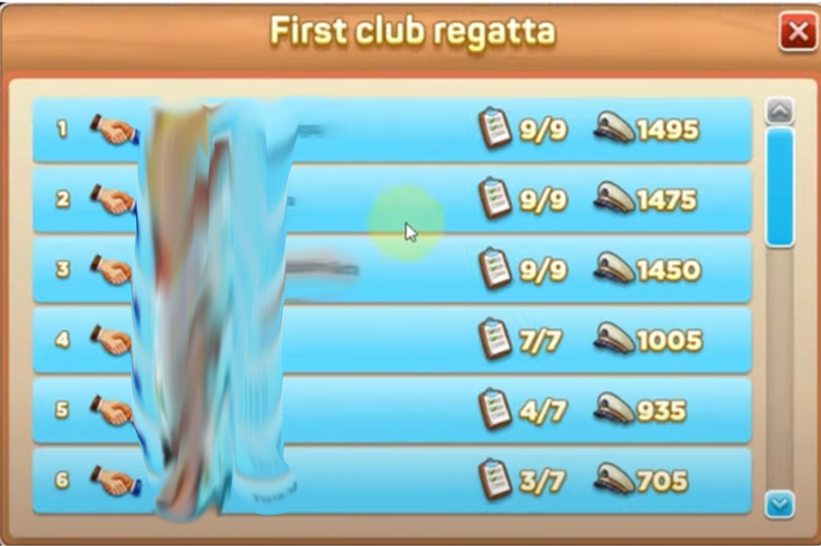 After completing 7 main quests, the player has the opportunity to additionally buy 2 quests to complete.

Paid quests are no different from free ones, the cost of each is 10 superbucks.

Race:
On the “Race” tab, you can see the position of your club’s yacht and your rivals’ yachts.
There are buoys-control points for all yachts. As soon as your club scores a certain number of points and passes the checkpoint, rewards become available to players (see further information on the “Rewards” tab).

In addition, the 3 clubs that score the most and fastest maximum number of points for the Regatta will be rewarded with a special cup – the Steering Wheel of the league which will also bring in-game bonuses during the allotted time.

Also the first 3 clubs move to a higher-ranking league where they will compete in the next Regatta. The higher the rank of the Regatta, the more cool rewards the club members will be able to get!

If the club fails to pass any control points, then it falls into the league below the rating.
Please note that in the first run of the Regatta, all clubs are in the same league, i.e. wooden.

Awards:
Prizes are given to players after the end of the Regatta – if you leave the club during the Regatta, you will not be able to receive prizes.

For each checkpoint, you have 3 prizes to choose from – you can pick up one, and you can also decide for yourself which prize you want. More checkpoints passed – more prizes!